Tauranga Moana
The western area of the district, which includes Tauranga City, is known as Tauranga Moana (Waihi Beach / Bowentown to Pāpamoā) and was first occupied by the iwi of Ngāti Ranginui, Ngāi Te Rangi and Ngāti Pūkenga from the waka Tākitumu and Mātaatua. 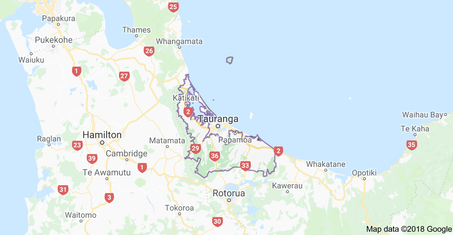 Western Bay of Plenty​ (see enlarged map here)​​spans from Waihi Beach to Pukehina Beach and Otamarakau taking in the Kaituna Catchment, Kaimai and the Wairoa River, and Tauranga City. Mauao (Mt Maunganui) sits at its heart.

​The region covers 212,000 hectares of coastal, rural and urban areas, much of which is considered as Taonga, meaning a natural treasure.  This region is steeped in New Zealand Māori and colonial history, culture & heritage and is New        Zealand's fastest growing region today.
The earliest known settlers to Tauranga were Māori who arrived in the Tākatimu, Mātaatua and Te Arawa waka (canoes) in the 13th century, forming part of the original migration from East Polynesia (Hawaiki) to Aotearoa (The Land of the Long White Cloud), today known as New Zealand.  At 9.00 am on Friday 23 June 1826 The Herald was the first NAMED European ship to enter Tauranga Harbour, 'Tauranga' meaning 'safe harbour', albeit it is well known that other ships carrying Europeans arrived earlier than this.
Read more here
Western Bay of Plenty, East
Te Puke, Kaituna - Maketu: The eastern area of the Western Bay covers Te Puke, the Kaituna Catchment and on to Maketu down to Otamarakau.  This region was first occupied by the iwi of Coastal Te Arawa from the waka Te Arawa. This iwi carries on over the borders of Western Bay of Plenty into Eastern Bay of Plenty and Rotorua Lakes District.  It is believed that Te Arawa was the first waka to land
in New Zealand at Maketu at the mouth of the Kaituna River. ​

​​       Note:  The History of Te Arawa is an important book by Don Stafford with the Foreward by
Professor Paul Tapsell. You can buy the book here