​The Original Tangata whenua Settlements of Western Bay of Plenty

It all began in the 13th century
The earliest known settlers to Tauranga were Māori who arrived in the Tākatimu, Mātaatua and Te Arawa waka (canoes) in the 13th century, forming part of the original migration from East Polynesia (Hawaiki) to Aotearoa (The Land of the Long White Cloud), today known as New Zealand.  At 9.00 am on Friday 23 June 1826 The Herald was the first NAMED European ship to enter Tauranga Harbour, 'Tauranga' meaning 'safe harbour', albeit it is well known that other ships carrying Europeans arrived earlier than this.
Read more here
Tauranga Moana | Western Bay of Plenty, West
The western area of the Western Bay of Plenty district, which includes Tauranga City, is known as Tauranga Moana (Waihi Beach / Bowentown to Pāpamoā Hills) and was first occupied by the iwi of from the waka Tākitumu and Mātaatua.

Te Arawa & Waitaha | Western Bay of Plenty, East
Otanewainuku, Te Puke, Kaituna, Maketu: The eastern area of the Western Bay covers Otanewainuku, Te Puke, the Kaituna Catchment and on to Maketu down to Otamarakau.  This region was first occupied by the iwi of Coastal Te Arawa from the waka Te Arawa and covers two iwi from this canoe:
It is believed that Te Arawa was the first waka to land in New Zealand at Maketu at the mouth of the Kaituna River. ​
Read about the Kaituna River today here  ​
Bay of Plenty IWI Constituency
​Iwi perspective across Bay ofPlenty 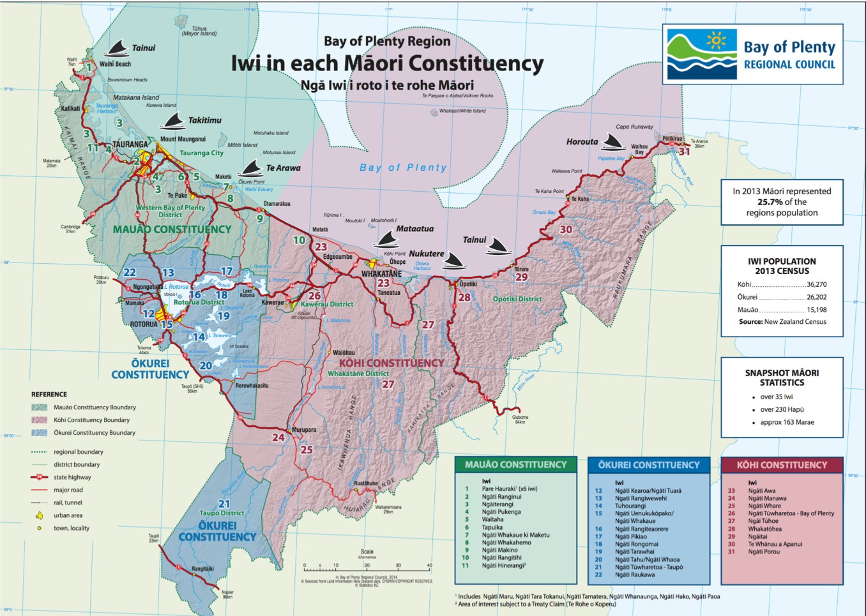